After a bit of a hiatus, I’m back with the latest installment in The Market Ace saga. “Out There/Right Here” is my 43rd album and was recorded in the late winter and early spring months of 2017. The name itself, like most of my albums is an oxymoron/paradox, but to me, it’s sort of a self-reflecting definition of who I am (or at least who I think I am) as a person and as an artist. I structured the album so the contrasting styles of each track alternate between the two “categories”….out there/right here. One minute you might be hearing some dark bass driven track, the next you'll be hearing some chilled spacey track (and sometimes both within the same track).... Sort of an ebbs and flows or wavelike format to the styles and sounds heard on the album.

I personally consider Out There/Right Here to be more of a mellow and introspective album due to a majority of the spacey, down tempo ethereal vibes of a lot of the tracks. Not to say there aren’t a handful of gutter bangers in there, but the overall vibe I think is fairly chill in comparison to past albums.

Regardless of what I think about it……here’s what “Out There/Right Here” is all about…. 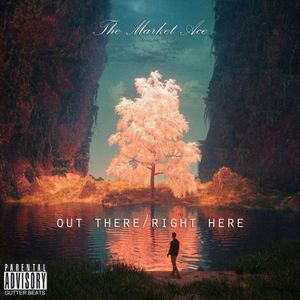